DOWN WITH THE KING: LeBron James’ latest move? The PR power play

DOWN WITH THE KING: LeBron James’ latest move? The PR power play 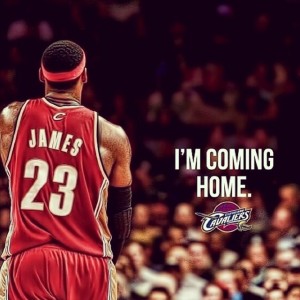 Last Friday, LeBron James almost broke the Internet. As the world impatiently awaited to hear where he would suit up this NBA season,speculation was par the course for King James. Critics wondered from where he would proclaim his next decision – the Oval Office?The UN? The Vatican? Area 51?

This of course, dominated the news cycle. Not only sports, but penetrating pop culture. Once LeBron made his unannounced announcement, tweets were talking. This was big, given the backlash when he left Cleveland for Miami. This was home to James and his family, but there were bridges on both sides to rebuild. Had to be approached the right way. LeBron and team delivered.

Players were talking. Rappers. Hollywood. The news. And, naturally, social mediawas buzzing. In 2010, The Decision alienated many LBJ brand loyalists. In 2014, hisdefining decision restored his brand. In PR, there are moments in which we witness a campaign or plan in action, and think: I wish I would’ve done of that.

What LeBron James did last week, was one of those moments. Here’s how:

« What is Gumball 3000? Why Marketers Should Take Notice
Selfies in church? Yes, please – how technology is amplifying inspired moments »