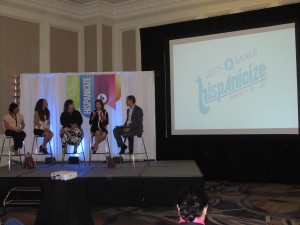 The last couple of days at Hispanicize have been a whirlwind, with session after session chock full of insights, emerging trends, and – because we’re Latino after all – a lot of fun. Here’s a snapshot at some key learnings and insights, straight from Miami:

Challenges and opportunities facing Hispanic PR – In this interactive session, the discussions centered on how PR practitioners can strive for more diversity in the industry and encourage more young Hispanics to get into the industry. “The [public relations] industry as a whole struggles to find good PR practitioners who get PR, let alone Hispanics who get PR,” said Zandra Zuno, Executive Director and Multicultural Lead for Golin. “If you don’t have the right people then progress overall won’t happen.” Some suggestions include encouraging young Hispanic PR hopefuls to seek out internships while in college, encourage mentorship programs through organizations like the Hispanic Public Relations Association, and to inspire a culture of family and understanding – key touch points of Hispanic culture.

Race matters in news coverage – With police shootings in Ferguson and New York still top of mind, a panel featuring Hispanic journalists from CNN, Al Jazeera America, the St. Louis Post-Dispatch, and USA Today discussed how race plays a major role in news coverage and how Hispanics are portrayed. “Race is not just black and white,” said Sarah Hoye, Al Jazeera America correspondent for America Tonight. CNN reporter Nick Valencia urged young media professionals to do better than the current generation in making sure that Hispanics are not overlooked and are fairly portrayed in media. “A key challenge in the Hispanic community is proving that we are relevant,” Valencia said. “We know we’re relevant, but everyone else needs to know too.”

Connecting to Hispanic audiences via Facebook – Everyone knows that Hispanics over-index on social media compared to other demographic segments, so its no surprise that brands have discovered Facebook is key to engaging the Latino audience. In fact, according to Christian Martinez, head of U.S. multicultural sales for Facebook, there is no longer a “general market” because all content must be personalized to be effective. And according to Mike Valdez-Fauli, CEO of Pinta PR, an emerging trend is that walls are coming down between advertising and PR, especially when it comes so social media campaigns that blur the lines between the two. “Social media should be about fun,” Valdez-Fauli said. “Make it fun for the consumer and bond with people.”

Don Francisco honored with the Hispanicize Latinovator award – Ask any Latino – literally any in the last 54 years – what they watched on Saturday nights, and they’re likely to respond with Sabado Gigante. Hosted by Mario Kreutzberger – a Chilean better known as Don Francisco – the show began in 1963 and is the longest running variety show in television history. Greeted with a minutes-long standing ovation, Don Francisco took selfies with the crowd and spoke about his formative years in Chile, traveling to New York to become a tailor (but lost interest and spent most of his time watching TV), going back to Chile to start his show (he wanted to combine all the shows he’d watch in the U.S. into one), and finally settling in Miami as his show took off in popularity. “El que persevera triunfa,” Don Francisco said as the secret to his success – he who perseveres triumphs. Don Francisco urged the crowd to “seek the truth, be honest. As communicators we need to unite, strive for progress, and we have a responsibility to our communities.”

Hispanicize wraps up tonight with a concert by Gente de Zona at the legendary Fillmore theater in South Beach. Once again FCG Latino will be there so you don’t have to, so stay tuned.